Today I am showing how we are adding a beam to a load bearing wall at the Foxboro Split level house. If you missed the post where we opened up the kitchen wall into the dining and living room, you can see that here (plus see before pictures)!

How to add a support beam to a load bearing wall

Adding an LVL architectural beam is how you support a load bearing wall if you want to remove such wall. 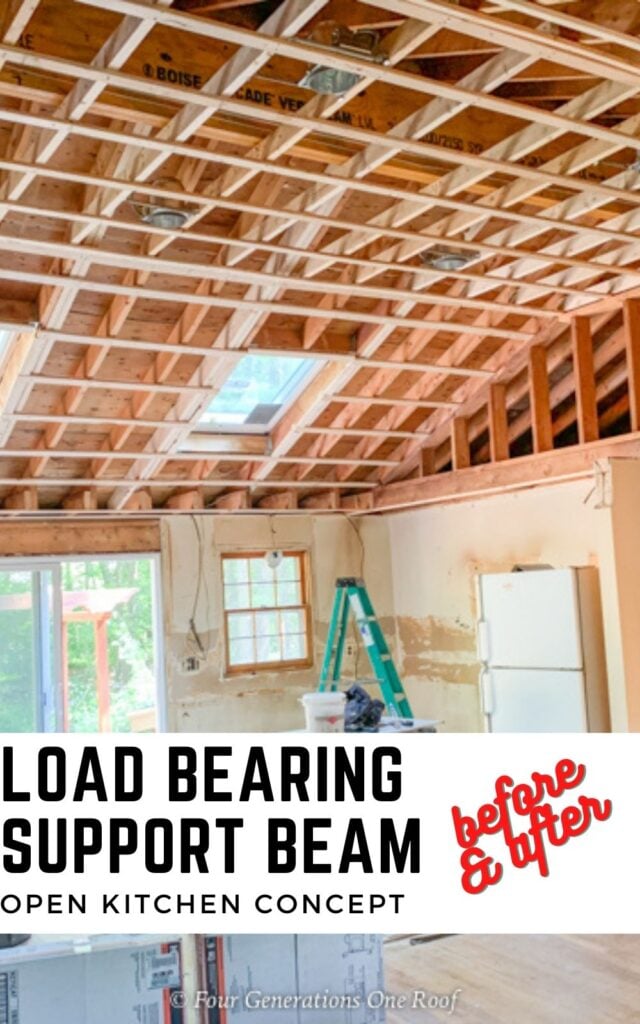 Here is a picture of the kitchen before we took down the wall between the kitchen and living room.

Here is a picture of the side hutch wall most of the facing wall removed.

As you can see above, we left the 2×4 framed wall which is a load bearing wall as a temporary measure until we got the LVL beams installed.

Here is a picture of the ceiling after we removed the load bearing wall (the wall that separates the kitchen from the dining and living room) and removed the ceiling in order to create a cathedral ceiling.

You can see the two LVL beams above the strapping pieces directly below the roof.

How do you install a support beam

Here are the details about how we installed the load bearing support beam.

Getting the beam into the house was a challenge as it was 20 feet long and very heavy they pulled it in through the window.

Once the beam was in the house, they used support braces to assist in keeping the beam in place.

We added two beams that were fastened together with lag bolts.

The two LVL beams were approximately $285 each which Jim picked up at our local lumber yard.

The beam is fastened to support posts at each end of the house that continue down to the foundation.

The two beams up top are fastened together with lag bolts.

Cost of adding a beam to a load bearing wall

When adding a beam to a load bearing wall, you will need a design plan from a licensed engineer with calculations to submit to the town for their records.

The architect drawing up your plans will measure all the existing house conditions and calculate the load requirements for the beam in order to size the LVLs required.

Once the support beams were installed, they removed the temporary wall frame and bracing.

The strapping (the long skinny pieces of wood running along the ceiling) are to attach the white planks that we have coming.

Yes!! The ceiling will not be sheetrock, it will be country style white planks!

The next step is to do the electrical wiring and insulate.

Missed some of the posts in this Split Level House Renovation Series?

The new black windows arrived last week so we are hoping to install them soon.

The slider above will be removed and the opening will shift about 3 feet to the left, allowing for more counter space in the kitchen.

As you can see, adding a beam to a load bearing wall can be a little tricky and needs to be installed by a professional.

Be sure to check out last weeks post to see the kitchen load bearing wall before we tore it down. The 1970’s kitchen was pretty scary!