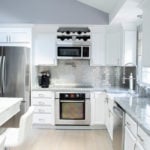 Today I am sharing Jim’s split level home remodel ideas that sold 80K over asking price.  You guys, this isn’t your typical raised ranch or split level house and today, I am showing you how to modernize a split level home interior and exterior to create a modern open concept home.

If you have been following our Instagram page and stories, you know that we recently finished renovating a different split level house next door and wow, it came out amazing! If you want to click through to our “split level house renovation page,” you can see all those related remodeling projects.

Jim bought this 1970’s split level house in the late 1990’s and sold it last summer just prior to moving in with me. In case you missed the marriage proposal , Jim selling his house and moving in together blog post, you can catch up on all that good stuff here.

What is a split level house?

A split level house is a style in which the two floor levels are staggered. Typically you walk in the front door and there is a small entry floor space with two sets of short staircases leading to the lower and the upper level. The inside of a split level house is almost always the same in every house.

The upper level is where the kitchen, living room and bedrooms are located.

This split level home was built in the 1970’s and over the years Jim updated the entire house. Over the years, Jim added an addition and created an open concept vaulted ceiling living room. Be sure to click through to this post, “how to add a load bearing beam” to vault a ceiling.

One of the biggest complaints today about a split level home is that the rooms are small and boxy.

There are several split level addition floor plans on Pinterest and Google but the biggest thing you can change in a split level  home is taking down the walls between the kitchen, dining and living room. Which is exactly what Jim did.

In the picture above, there use to be a wall that separated the kitchen from the dining room and living room.

When removing the kitchen wall in a split level house (or any load bearing wall), you will need an architect to construct and engineered beam that will need to be installed across the entire kitchen and living room space in order to keep your house from falling down!

How to modernize a split level interior home

As you can see, kitchens with cathedral ceilings offer a space that feels modern and large.

You would never know when inside this house, that it was a split level house.

One of the biggest features in this split level house are the vaulted ceilings with skylights that Jim installed in the kitchen living room area and the sunroom.

On a side note, if you are interested in opening up  your ceiling like this one, be sure to read this post “how to add a shiplap to a vaulted ceiling.”

Removing the kitchen wall in a split level house and vaulting the ceiling creates an open concept space which is conducive to today’s style of living.

The installation of the skylights in the kitchen provide maximum natural light which also creates a more visually appealing space.

Down the hallway past the bedrooms, Jim decided a few years ago to open up one of the bedrooms and enclose an existing screen porch creating an open concept sunroom bar living space. A split level house addition is a great way to add more living space. Many split level homes lack a master suite so theoretically, this addition that Jim added could also used as a master bedroom.

A split level home typically has 3 bedrooms and 1 bathroom on the upper level so when Jim decided to open up the 3rd bedroom (above where the bar is) and add on a sunroom addition (below), he lost a bedroom.

I love the skylights in the vaulted ceiling along with the wood planks.

I love how Jim turned this bedroom into a bar area and opened up the back wall that leads to the sunroom addition creating an open concept space.

Heading back down the hallway towards the kitchen, are 2 bedrooms and a full bathroom.

This was Jim’s daughters bedroom below.

A few months after Jim and I started dating in June 2020, we decided to make a room for my son so he would have his own space on Friday nights when we would head to Jim’s house for the weekend.

My son typically goes to his dad’s house on Saturdays so it was nice once we made over the spare bedroom below, into a space for him.

You can see that entire makeover before and after here.

I don’t have a picture of Jim’s entryway but it’s very similar to this split level entryway that we recently remodeled. The open concept stairway with metal balusters provides a clean modern style.

Jim lost the 3rd bedroom due to the sunroom and bar space addition, so he created a master suite in the lower level which was genius.

He created an open flow hallway at the bottom of the stairs and used french doors which added a feeling of openness to the space.

Finishing off the lower level (or basement) in a split level home is huge as it adds so much more square foot of living space. Check out how we refinished the basement in our other split level home we sold last year.

The master cedar walk in closet (I don’t have a picture of it), office / 4th bedroom and laundry room are across the hallway and around towards the master bedroom bathroom.

Jim even built in a small beer refrigerator in the shower.

I remember when I first saw this when we starting dating and I was like, “you have a beer fridge in the shower?” -ha.

He stocked it with my favorite Truly’s and then I knew he was a keeper 😂.

The possibilities are endless with a split level house when you start taking down walls and opening up the ceiling.

The backyard is completely private surrounded by lush plantings, trees and vinyl fencing.

As you enter the backyard from the paver driveway, a pretty walkway led you to the pool and massive entertaining space.

Jim loves plants, shrubs and all things greenery which you can see, really made this outdoor space pop.

There were so many cool features in his backyard from the hot tub deck, to the full cabana, firepit space and movie cabana.

Looking at all of these pictures makes me miss this place!

Jim ended up buying the neighbor’s split level house so be sure to check out the split-level home remodel exterior on that home! It’s dramatic!

At the time Jim decided to sell the house, the market was insanely hot and the fact that he could move in with me and not have to buy something else was even better. He was able to capitalize on all his hard work over the years and the work paid off, plus some.

The Jimmy Buffet style pool cabana was such a great place to hang out, have some drinks and enjoy the pool.

Shortly before Jim had to move out, I asked him if he was sad about leaving.

He said, “yes definitely sad but time has run its course here and there isn’t anything else I can do to this place. I am ready for a new challenge – a new house to either build or renovate.”

Needless to say, Jim had the ultimate bachelor pad ever.

Who would have known!

Do you want to see another split level home remodel? This project was so much fun and you will not believe the inside and exterior remodel. The inside was completely gutted, all wall between the kitchen, living and dining area were removed, vaulted ceiling added, fully finished basement and brand new open concept kitchen was installed. It’s crazy how different the exterior looks as well. See the entire remodel here on the split level remodel page.