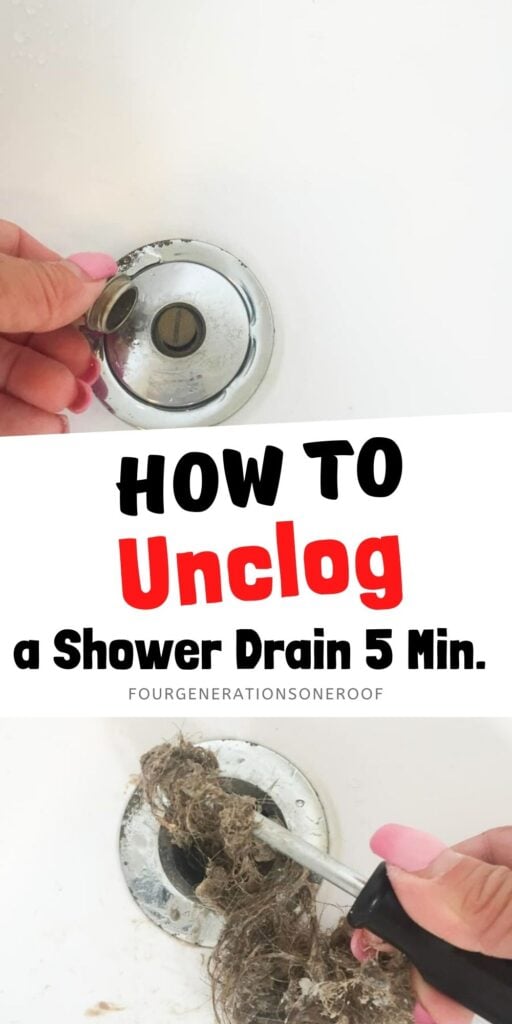 How to unclog a shower drain in 5 minutes

A shower drain clogged with hair is one of the most annoying things ever. I was so grossed out by the hair and soap scum in the drain once I removed the screw and pulled out the drain.

Needless to say, I clean it more often now.

This post may contain affiliate links for your shopping convenience.

I originally wrote this post a few years ago when my grandfather was still alive and I’ll never forget his face when I told him I didn’t know how to unclog a shower drain.

He said, “how long have you been standing in water for?”

When I told him it was for weeks he rolled his eyes and said, “kid, I wouldn’t ever tell anyone that 🤪.” haha.

How to unclog a shower drain naturally

My grandmother would use a cup of baking soda followed by a cup of vinegar and said that was the best way to unclog a shower drain. I also read on google that boiling hot water, a hook or a plumbers snake can help.

Google shows that bathroom drain covers can help with catching the hair before it hit your drain.   I have not tried one yet but I did find this drain cover to stop hair (they come in cute colors too!) with great reviews on Amazon.

Products to Unclog A Shower Drain

I think I used 2 bottles of drano trying to fix the problem. There was so much hair in the bathtub drain, it didn’t help. I tried several attempts to unclog the shower drain naturally as well and was not successful.

How to Remove A Shower Drain

The only tools needed is a screwdriver and if you do not have a tools, use a butter knife to unscrew the drain screw. Once you remove the drain screw, the plug will pull out.

Cover your eyes if you don’t want to be grossed out!

Once the screw was removed, I pulled out the drain plug and almost vomited.

Once the drain plug is cleaned, put the plug back inside and tighten the screw back in place.

Please tell me I am not the only one who had no idea how to unclog a shower drain.

Don’t be like me and wait until the water is rising above your feet in the shower and you are standing in water for weeks!

Disclosure: This post contains affiliate links for your shopping convenience.

What started as a hobby, Jessica’s blog now has millions of people visit yearly and while many of the projects and posts look and sound perfect, life hasn’t always been easy. Read Jessica’s story and how overcoming death, divorce and dementia was one of her biggest life lessons to date.