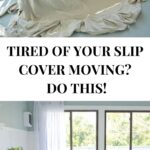 Today I am sharing how to reupholster a couch without sewing. If you have a couch that is old and ugly, don’t trash it just yet! My DIY couch got a huge makeover and I couldn’t be happier with the results.  Give your old tired couch a new look and trust me, you can do this. I used an old couch cover from Pottery Barn, a staple gun and a pair of scissors.

If you have been following the blog for a while, you know that I sawzalled an existing couch in half and removed two feet and then assembled it back together finishing it off with new upholstery. Don’t believe me, click through this post DIY Couch to see just how I did it!  The couch has seen many modern looks over the years but I decided to reupholster it again with an old Pottery Barn slipcover that was in the bottom of my closet.

It’s crazy how this couch upholstery tutorial is currently trending on Pinterest and being featured as an interior diy hack that is cheap and easy way to cover an old couch. Yay!!

How to reupholster a couch without sewing

How to reupholster a couch without removing old fabric is a simple way to update your sofa.

In case you are new to our blog, this is what the couch looked like after I sawzalled it in half. A family friend gave me this couch several years ago when I bought my first house and over the years, my taste in fabric changed but I couldn’t afford to buy a new couch. The couch was also too big for my current home so I decided to remove 2 feet from the middle to make it smaller turning this into the best reupholstered DIY couch ever.

Kind of crazy right? Well this little old sofa is getting a new look, again.

Do you love the look of slip covers but hate all the wrinkles and mess? The one piece slipcovers that you buy as is are beautiful as long as you don’t sit on the furniture.

Do you know what I am talking about?

They come in one size and usually, you have excessive amounts of fabric tucked everywhere. Drives me crazy! So my solution was to reuse the existing large one piece slip cover and cut it to size and staple/nail it to the couch. Easy peasy!

How to reupholster a couch with a staple gun

First step, drape your fabric slip cover over your piece of furniture.

Next step, cut the excessive fabric (on the floor) off but be sure to not cut the pleated part. You will want to save the pleated part to re-staple to the couch along the bottom edge.

Now it’s time to cut out the middle piece of your fabric. I decided to cut straight across being sure to leave enough fabric to cover the back and sides of the couch.

How to Reupholster a couch without removing the fabric

This is such a great way to reupholster a couch without removing the fabric first. There is no need to remove the old fabric. This guide will save you so much time!

Now, simply tuck your fabric and staple with your hand powered staple gun. I used a compressor and heavy duty staple gun with 1/4″ staples. Be sure to staple to the wood part/frame of the sofa.

The materials needed simply consist of your fabric, staple gun, staples and an air compressor.

Try to staple as close to the bottom and up underneath in order to hide the staple.

I cut a piece of fabric (from the slip cover excess) to cover the front and stapled. I chose to leave the arms of the couch “loose” simply because I wanted a casual look. You can always staple the fabric around the arms to give it a more tailored look. It just depends what look you want.

If you make a mistake or don’t like it, just get a hammer and screwdriver and pry out the staple. That is the beauty of a DIY sofa upholstery project, you can change things as you go if you do not like it.

Don’t worry about getting the fabric perfect. You will be able to cover the edges and trim with the existing pleated skirt that you cut off earlier.

You can always make diy piping too for the edges if you have extra time.

See below how I stapled the skirt back on the couch. This gives the couch a finished look.

I tried to staple where the staples wouldn’t be seen but a couple do show. You can purchase roping or ribbon in the fabric store and use stitch witchery to adhere to the slipcover if you want to hide the staples. For me, they are hardly noticeable.

How much does it cost to reupholster a couch?

Many of you may be asking how much does it cost to reupholster a couch? I already had the slip cover so for me, it was minimal! Just the cost of staples and my time. That’s it!

Of course if you want it perfect, you will need to invest hundreds of dollars, maybe even thousands and pay to have it professionally upholstered. For me, that wasn’t an option. At one point I had a professional upholsterer near me give an estimate and it was going to cost almost $1200 to have it reupholstered.

I think the couch recovered in a camel covered slip cover fits right in with our newly renovated modern cottage pool house.

How to reupholster cushions on a couch

For the cushion, I used the remaining fabric that I had cut off in the beginning and sewed the ends together and used velcro to close the seam of the cushion. I ran out of zippers and velcro is what I had so that is what I used. I may sew a zipper on the cushion cover at some point.

Be sure to also check out my how to reupholster a chair tutorial too. It’s a new sew tutorial and if I can do it, anyone can do it. How many yards of fabric to reupholster a couch? This was a full couch cover so I don’t have the exact yards I used but if you are buying fabric, keep in mind that 1 yard = 36 inches. So you will need to measure the length, width and height of your couch and then add extra for excess and divide that number by 36. I would definitely buy extra just to be safe.

By reusing a slipcover that cost over $300, I was able to save money on the cost of buying fabric and by stapling the slipcover in place, the the fabric now stays put!

A fresh new look for a sofa that use to be two feet longer for zero money!

How long does it take to reupholster a couch?

This reupholstered couch project only took me two hours. Be patient and take your time, the cost savings is worth it.

Get yourself a small compressor and heavy duty staple gun (that works with a compressor), some fabric and get busy!

Leave a comment below and let me know what you think of this project! Do you have a couch you would like to reupholster?