Seafood chowder can be expensive especially if you buy the fish fresh. My mom’s cheap and easy crockpot clam chowder with canned shrimp, potatoes and frozen potatoes is a definite crowd pleaser. My mom whipped this chowder up in 10 minutes and it cooked for the afternoon last week during a snowstorm. It was absolutely delicious and I love the fact that the Half-and-Half cuts down on the calories vs. heavy cream.

This recipe is from a Rival Crock Pot cookbook my mom has had for years.

We didn’t have oysters as the recipe called for so we used chopped clams.

My mom also found a few crockpot clam chowder recipes on the Allrecipes website that called for celery, carrots or corn but she decided to leave out the vegetables as my son is picky.

This crockpot clam chowder recipe calls for canned potatoes and fish but you can definitely use fresh fish and regular potatoes. If you have minimal time or are on a budget, this recipe is for you! 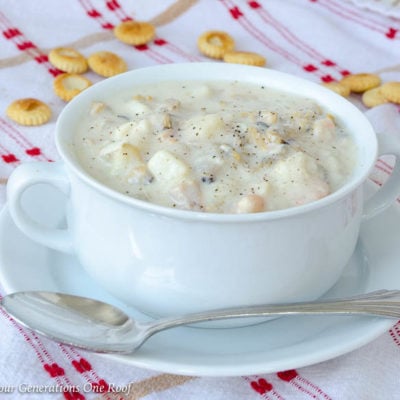 Jessica Bruno
Easy crockpot clam chowder recipe with canned shrimp. My mom made this last weekend on a cold stormy night and it was amazing! You can use fresh clams and shrimp but we only had canned so that is what we used. Only 10 minute prep time!
Print Recipe Pin Recipe
Prep Time 10 mins
Cook Time 5 hrs
Total Time 5 hrs 10 mins
Servings 6 servings

The frozen hash brown potatoes add an extra layer of smaller potatoes. Feel free to use regular potatoes vs canned as well.

If you are looking for other chowder ideas, you may also like our (click link to view) crockpot seafood chowder recipe.

Our seafood chowder recipe {crockpot} below uses evaporated milk and chicken broth and is also easy to make.

My gram’s delicious clam chowder with corn (click link to view recipe) is also a family favorite.  As you can see below, this chowder is a bit thicker and also uses evaporated milk. You also thicken the chowder with corn starch as well.

Have you ever wondered how to make thick New England clam chowder on a budget? Well heavy cream is the trick but it comes with a lot of extra calories. You could definitely use this recipe and substitute the half-and-half for heavy cream. Purchasing canned clams is trick to a budget friendly clam chowder.

Adding shrimp to clam chowder is a delicious addition to the chowder. I personally love any type of chowder loaded fish and I usually make a huge pot of seafood chowder for our Christmas Eve festivities. My Christmas Eve chowder is one of my favorite dishes during the Holidays and serves a large crowd.

What started as a hobby, Jessica’s blog now has millions of people visit yearly and while many of the projects and posts look and sound perfect, life hasn’t always been easy. Read Jessica’s story and how overcoming death, divorce and dementia was one of her biggest life lessons to date.